By request, here is a comparison of economic performance by President Carter vs. Bushie - a head-to-heat comparison of these two titans of fiscal genius reveals that Bushie fails yet again.

To remind readers, Bushie has increased federal spending by about $1 trillion from Bushie's first budget. By comparison, Carter increased government spending by about $219 billion during his term. GDP increased by just over $1 trillion under Carter and $2.8 trillion after 5 plus years of Bush - however the percentage growth greatly favors Carter. So as bad as the 70s were, GDP was growing at a faster pace than today. The national debt has increased $2.6 trillion over 5 plus years of Bush. Under Carter, it grew by $276 billion. The following show the percentage growth rates in GDP, government spending, and debt accumulation: 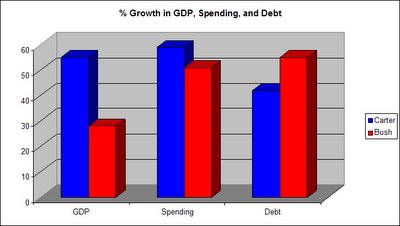