Just a great, great game last night as the Caps recovered from the devastating Game 5 loss in New York to beat the Rangers 2-1 in DC and send the series to Game 7 on Saturday night. I cannot wait to see what happens.

Braden Holtby was just tremendous in goal. He closed everything down. The late goal by the Rangers was one of those weird flukey type goals that bounced off John Carlson in front of the net and plunked in.

The opening goal just over a minute into the game by Ovechkin really seemed to allow the Caps to play in a more relaxed fashion and when Chimera popped in the second goal things really looked good. It was intense until the end, but once it was 2-0 I felt pretty good (the last 50 seconds were tense).

Game 7 on the road is something I think the Caps are looking forward to. I am just amazed by the mental fortitude of this Caps team. Losing in triple overtime in Game 3 and then losing the heartbreaker in Game 5 would have destroyed Caps teams of old, but this team just seems to fight harder.
Posted by Rob at 5/10/2012 09:48:00 AM No comments:

Elections in Greece and France have created chaos in the world markets. Sarkozy is out in France, but the more alarming development is Greece. In Greece - which is suffering through terrible economic conditions - fringe parties that want to abandon austerity measures and the conditions placed on the country as part of the bailouts they have received have emerged. This is putting the economic stability of the entire Eurozone at risk.

As the coalition government is formed in Greece, we'll have a better idea about what direction their actual economic policies will go. But it is safe to assume that the markets and global economies will be under pressure.
Posted by Rob at 5/07/2012 10:45:00 AM 5 comments:

The April jobs report from the BLS showed an increase of 115,000 jobs. Nothing to write home about, but it was not a disaster either - just OK. Hopefully we will see some larger gains in coming months, but with erergy/gas prices high and continued weakness in Europe the numbers are reasonable.

I don't know, the guy is oddly engaging. I find his views and his ways of expressing his views funny. He is like an SNL character of a conservative.

The economy produced 120,000 jobs last month, and next week we will get the report for April. We have now had 18 straight months of job growth. It is important for people to understand where we have come from.

From the end of 2007 to January 2009 - the end of the Bush presidency - unemployment rose rapidly as the economy was shedding jobs at a horrific pace. In October 2007, the jobs report showed 79,000 jobs created. Throughout 2008 jobs were disappearing and by January 2009 the economy was losing more than 800,000 jobs. That is the situation in which President Obama began his term in office.

The actual numbers can be found at the U.S. Bureau of Labor Statistics. The following is a chart of the jobs created/lost from October 2007 to January 2009. There has been a very distinct turnaround since President Obama took office. 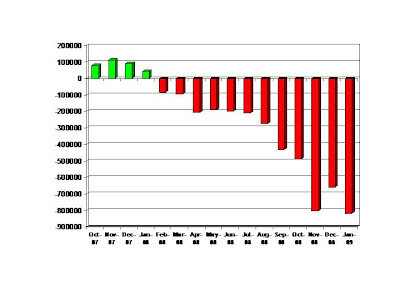 Sure, we would all like to see even faster job growth. But, at least we are now recovering from the disaster that we saw during the Bush presidency.
Posted by Rob at 5/01/2012 08:24:00 AM No comments: